Opened to the public in 1966, Corfe Castle Model Village depicts the castle and village as it was in 1646. You can compare the real castle with the model castle from our garden; this gives a fantastic idea of how it used to look prior to its destruction by Oliver Cromwell’s troops during the English Civil War, when it was home to Lady Bankes.

Built to 1/20th scale at the height of fashion for model villages, Corfe Castle Model Village was the brainwave of Mr. Eddie Holland, a local businessman. Mr. Holland first had the idea in the 1950s and wanted the model to be situated close to the real castle. When the property Drury’s (Dr. Dru Drury’s home and practise), in the Square of Corfe Castle, came on the market, he felt it was ideal for his plan. It took two years to build. The castle was built in situ on a man-made mound.

Many of the houses were built in the Potting Shed by Jack Phillips, the model village builder from Parkstone, assigned with the task of recreating the intricate detail of each house. Jack continued to maintain the Model Village for years to follow. Most of the houses have Purbeck stone roofs, each one with minute handcrafted tiles. The top of the King’s tower on our castle stands at 20 feet above the level of the moat, so it is pretty impressive. We also have a model of the model, and a model of the model of the model. Work that one out! In the model of the Church of Saint Edward, if you listen carefully you will hear music and a choir. 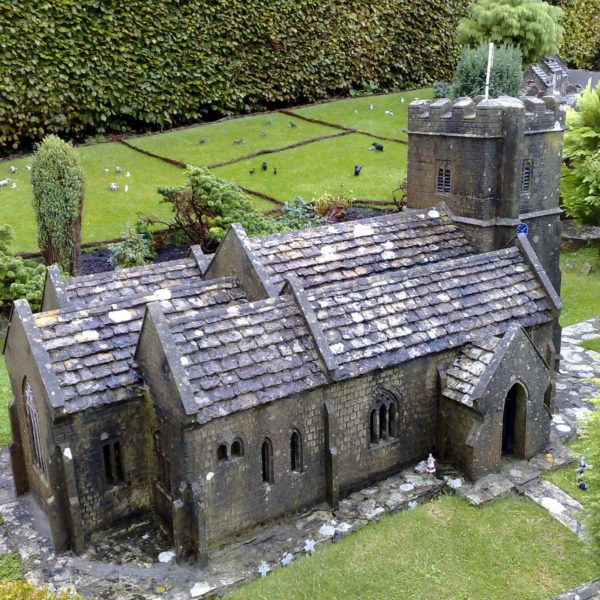 Previous
Next
Welcome to Corfe Castle Model Village. This website uses cookies. By continuing to use this website, you agree to their use. Find out more here.